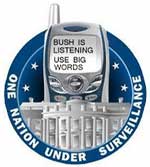 A deal was reached with the WH that would let FISA court determine the legality of the NSA program, reports CNN.

"Sen. Arlen Specter of Pennsylvania revealed a bill that would allow the same secret court that OK's wiretaps under the 1978 Foreign Intelligence Surveillance Act to judge whether the National Security Agency's domestic eavesdropping program is allowed under the Constitution." 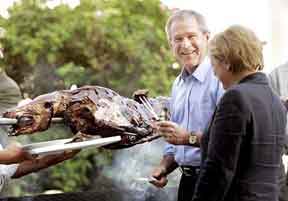 "I'm looking forward to that pig," he said. "I understand I may have the honour of slicing the pig. . .but I ain't seen [it] yet."

The boy king was clowning it up in Germany with German Chancellor Angela Merkel at a press conference. He was just so darn excited about the pig roast, he could hardly contain himself.


-------------
Did you hear about the Fox News reporter in Gaza City who was divulging the location of the Israeli troops over the air and then being shot at by Israeli troops? The news crew survived. I don't think you're supposed to spill the beans when you're reporting from a war zone...

Posted by Liz Blondsense at 8:01 AM