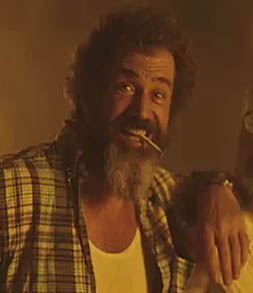 Yes, I know, I know and I readily admit it. At one time I adored Mel Gibson; back when Mad Max and William Wallace and buddy/cop movies were his thing. I know he REALLY pushed the limits with Braveheart, but I don't exactly look to Hollywood for accurate portayals of historic figures, so I didn't cause a fuss. I even gave a pass on THE PATRIOT, as I do expect a great deal of dramatization in Hollywood. (Yes, I was making excuses for him, but I'm a sucker for blue eyes, so sue me)

HOWEVER, when he started getting into these snuff films, even I had to shake my head and walk away. We are all familiar with The Passion of the Christ and how he pulled biblical passages out of his ass, supplemented them with old fables and mythos to create the greatest snuff film of all time and got it pass the rating board by slapping religious superstitions all over it. But apparently that was not enough. Yes, dear readers, Mad Mel is at it again, ANOTHER snuff film, this time cashing in on the 2012 end of the world Mayan mythology.

For a look at what some idiots are actually thinking about this, check out this website. Now mind you this is not exactly a new concept, I've been hearing about this since the late 70's. It's changed over the years, of course, as any good urban legend does. I did a little googling and came up with over half a million hits with Mayan + 2012. Last I heard, our computers, appliances, etc will turn on us and destroy us all.

Of course my twisted mind pictures the kitchen being the epicenter of the carnage. Microwaves chasing family pets and toddlers to play 'poodle in the oven' and the food processor looking for fingers to slice and dice and so on. However the sad thing is, a lot of people DO believe this will happen. (I put this down to a lack of education, rational thought and the loosening of reality)

And of course, that brings us back to Mel, who has chosen to DO A FILM about the end of life come 2012. Yes, you read that right... coming to theatres Dec 2006, APOCALYPTO

I'm heading off to get drunk now, the world might make more sense that way.
Posted by flame821 at 10:59 PM