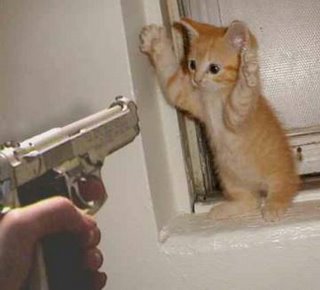 First, Aretha the dwarf hamster died because I didn't separate her from my evil killer hamster Uma fast enough.

The next week, I murdered a squirrel because he ran out in front of my truck faster than I could hit the brakes.

Then, two days ago, I cranked the truck & put it into gear to pull out of the parking lot here at Hotel du Fucktards, and I hear this horrible THUMP!, but nothing fell out of the transmission or the engine block, so I assumed that it was more vandalism by the mouth-breathers that have been attacking my truck, its antenna, and my sticker collection since I moved into this hell-hole.

Then, yesterday, came The Smell. Something between a skunk that's been dead a month and raw garbage in the July sun. Jake goes out to examine the interior & exterior of the truck, to see if I'd run over something and didn't know (which couldn't really happen, I don't think) or if we'd left some old Taco Bell bags in the truck.

He comes back in and tells me that he had discarded the carcass of a dead possum (that's "opossum" to you nit-pickers) from the engine block, because it had been caught-up in the engine fan the day before, hence the thump and the smell. He got rid of the evidence, I hosed-off the fan today, no more smell, no problem. Possums are vile, vicious, snarling, hissing, garbage-eating, dog-harrassing, food-stealing nasty greasy little verminous MONSTERS, so I wasn't too too torn-up over it.

Then we get into version #9,875,999 of the same schizophrenic fight that we've had over the past year (well, as of July 13, it'll be a year. Friday the 13th, I should've taken the hint.), and he blurts out that he'd lied about the possum.

It was this little orange stray cat that hangs around our dumpster, and who we occasionally feed when we can afford to.

I didn't think that I could fuck anything up as badly this year as I did the Toofus-Re-Doofus fund (four dentists, money gone, no progress, no toof, one badly-mangled root canal that resulted in a cracked tooth), but now I'm officially John Wayne Gacy. Former "professional" clown who kills several small animals.

If anybody needs me, I'll be under the bed, nursing a half-pint of JD and trying not to think about cats.
Posted by Anntichrist S. Coulter at 6:40 PM