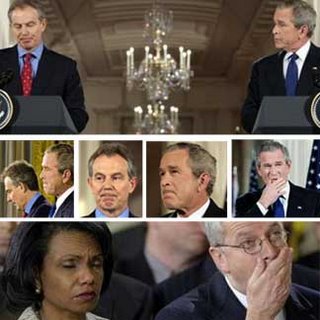 You don't even need to read what went on at the press conference last night if you look at the faces on the world leaders who fucked up the world.

Bush admitted a couple of mistakes. But not the mistake of invading and occupying Iraq to begin with. He blamed Abu Ghraib on ... well here's the quote:

PRESIDENT BUSH: It sounds like kind of a familiar refrain here. Saying "Bring it on." Kind of tough talk, you know, that sent the wrong signal to people. That I learned some lessons about expressing myself maybe in a little more sophisticated manner. You know, "Wanted dead or alive," that kind of talk. I think in certain parts of the world it was misinterpreted. And so I learned -- I learned from that.

And, you know, I think the biggest mistake that's happened so far, at least from our country's involvement in Iraq, is Abu Ghraib. We've been paying for that for a long period of time. And it's -- unlike Iraq, however, under Saddam, the people who committed those acts were brought to justice; they've been given a fair trial and tried and convicted.

The whole transcript is here
Posted by Liz Blondsense at 7:02 AM