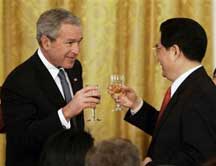 After yesterday's visit to the White House, Chinese President Hu Jintao would probably give bush a 1% approval rating and that was for the food.

Bush was saying: China can grow even more successful by allowing the Chinese people the freedom to assemble, to speak freely, and to worship.

The WH gave a press pass to a Hu heckler who spent a full 3 minutes screaming on the WH lawn before security took her away for speaking freely! Wow they don't give American protesters that long. Not fair. The Chinese warned the WH about being careful as to who was admitted to the ceremony on the lawn.


When Hu was leaving the stage via the wrong stairs, bush yanked 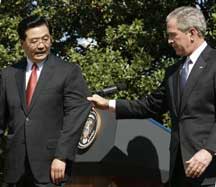 him by the jacket and tugged at Hu's sleeve. I believe that is faux Texan for, "Excuse me sir, but please step this way." Hu was not amused.

Memo to bush administration: When you are hosting a world leader, learn the name of the fucking country your guest is from. China was called Taiwan yesterday. oy.

You can read about all the protocol breaches (and there are quite a few) in the WaPo article that will only serve, once again, to embarass the hell out of you as an American tax paying citizen.

Bush had to apologize to President Hu. When it was time to discuss politics, Hu wasn't willing to make concessions. WaPo reports, "In negotiations, he gave the U.S. side nothing tangible on delicate matters such as the nuclear problems in North Korea and Iran, the Chinese currency's value and the trade deficit with China."

There were plenty of protesters in DC yesterday.

Oh this is good... Bush and Hu took questions from reporters. Hu gave a really long answer to one of the questions and Bush tapped his foot waiting for him. Can you imagine? I wonder if he did that stupid face he did at the first debate with Kerry? Where's the picture?


Afterwards, Hu stood up and proclaimed that the US and China had reached "a broad and important agreement on China-U.S. relations," which wasn't true but it made for good theater.

I have read elsewhere that Chinese television will censor the part of Hu's visit where he got heckled. Now that really isn't fair because I am sure the Chinese would enjoy that... and they can't even watch it on the internets because the internet is censored there too. Well I guess it's still better here than there.
Posted by Liz Blondsense at 9:07 AM