Would you buy a used car from this woman? 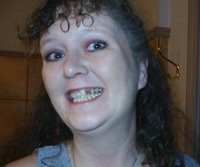 This is my Katrina story, as shallow, narcissistic, petty, selfish, trivial and pissy as it is

.
In September, 2004, my front tooth, long-ago root-canalled and spackled, shattered whilst I was eating bacon that my dad, The Dick, had overcooked (while I was homeless/jobless/hopeless and living with him & The Beastmaster in the lower sigmoid colon of hell). I then went to the Oral Surgery Clinic at Earl K. Long (state) Hospital in Baton Rouge. They yanked out the root, and then referred me (and my TMJ/crooked-joint jaw) to the Oral Surgery Clinic at Charity Hospital in New Orleans. Well, after another YEAR of fucking-around, including the jaw surgery that shaved-off the crooked part of my jaw joint and I volunteered to be a guinea pig for an Oral Surgery resident who wanted to learn Plastic Surgery (I was his first face lift, and boy-howdy, wasn't it a success!) --- I volunteered because they told me that it would get me the TOOTH IMPLANT that they'd been yanking me around about for a year --- still no front tooth.

Finally, because of my repeated appearances & lovely demeanor whilst being jerked-around for a YEAR about this shit, as well as a THOROUGHLY NIGHTMARISH stay at Charity for three fun-filled days when the Plastic Surgery Wannabe Boy LIED TO MY FACE that they had "accidentally autoclaved" the promised tooth implant which never really existed --- after another six months of circle-jerking, I finally got kicked to the Dentistry Clinic, where this very lovely young resident from Brazil finally started on my implant (after the Oral Surgery jokers had pounded the first of three parts of hardware into my skull with a steel hammer and no anaesthesia).

So --- on August 29, 2005, I had an appointment at Charity to finally get my new tooth installed. Unfortunately for a whole helluva lot of people, Hurricane Katrina hit New Orleans at around 6:30A, and pretty much destroyed Orleans Parish and Charity Hospital.

New Orleans will be rebuilt. Unfortunately, thus far, the major contracts have gone to Boh Bros., The Shaw Group, and HALLIBURTON, so the New Orleans that we knew & loved will never exist again. Instead, much of the soul of that city is being replaced by yuppie condos and "gentrification."

Unfortunately for me, (and about 800,000 other people) Charity Hospital will never exist again. I've called the newly-relocated LSU School Of Dentistry, as they're trying to help most former Charity Oral Surgery/Dentistry patients, but they haven't returned my calls yet. The old Dentistry School in New Orleans DID take my call and wrote down my name, BUT they only have ONE full-time resident working there, and NO MONEY. Oh, and even if I could afford a dentist on my own, like a grown person with a life, EVERY SINGLE PAPER/X-RAY FILE OF CHARITY PATIENTS WAS DESTROYED IN THE FLOODING OF THE CHARITY HOSPITAL BASEMENT AND FIRST FLOOR.

So I don't even know what part to order, if I could go to a private dentist to order the other parts.

Why am I sharing all of this shit now, when Katrina evacuees can't vote properly in many instances, when the GOP is holding special "rallies" (picture as many burning crosses in the background as you'd like) to REMIND the remaining caucasians (and the newbies coming into the city from the suburbs, now that the city isn't "as dark" as it used to be) that NOW IS "THEIR" TIME TO TAKE ORLEANS OVER?

People are dying and starving in the world and New Orleans is still at only about 12% occupancy, and most of the POOR neighborhoods are still without water or electricity, and I'm on BlondeSense, ranting and raving and bitching and whining because I don't have a TOOTH?!?!?

Like I said, it ain't right, it ain't positive, and it sure as hell ain't productive or good for vote-gathering --- but it's my story.

As most of y'all know, Jake and I busted our asses for five weeks after Katrina (and five days before the fucking RED CROSS would stop jerking each other off long enough to do SHIT!!!), dispersing all of the food & supplies & first aid stuff that Y'ALL bought for us to help the evacuees who were, for the first 2 weeks after the storm, being royally fucked-over and discriminated against by their FELLOW LOUISIANIANS, not to mention the Republicunt FIEFDOM in D.C.

But I haven't been able to SMILE in over 18 months, and I'm fed the fuck up and tired of it. I know that I look "better" when I'm pissed-off as in the above photo after Fantastic White-Trash Crack-Whore Sam's fucked me out of my hair donation to Locks Of Love, but just once, I'd like to be in a picture with my nieces & nephews without looking like a smirking fat moron.

Should I just suck it up and grin like the proverbial "Deliverance" hillbilly, and just get used to it, or should I go mug some rich republicunt pencil-pushing Department of Health & Hospitals lackey who's keeping New Orleans from ever having a public hospital again?