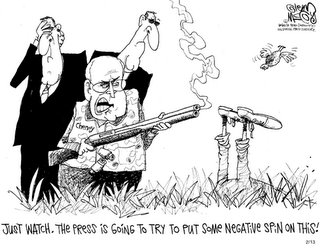 I find this whole thing fascinating...

Whittington was reportedly behind the group searching for a bird carcass when Cheney turned around to shoot birds that had taken flight. (From Does Dick Cheney Know How To Hunt?)

Full of Holes: "The hunters are supposed to maintain a horizontal line as they move forward, but this is easier than it sounds in rough country. When someone falls behind—someone, for instance, like Harry Whittington—the person in charge calls a halt until the line forms up again. Whittington, as we know, dropped back to pick up a bird. This happens all the time in quail hunting; the question is, why did the other two hunters keep going?"

Harry's office in Austin is very angry about the coverup and McClellan's nonsense spewing to the press corp. They are also skeptical about the "offical story" as many are quail hunters and don't think Harry was 30 yards away because of the damage he sustained.
Posted by Liz Blondsense at 10:12 AM