The He-Man Woman Haters Club Is At It Again 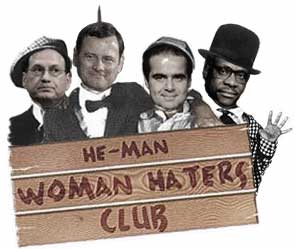 The Supreme Court has reopened a key abortion case that attempted to ban late term abortions in 2003 that was deemed unconstitutional. Now with a SCOTUS consisting of a bunch of conservative men, here we are again.

Heinous, outspoken critics of abortion (mostly men) have labeled late term abortions barbaric and a key part of the US culture of death, overlooking the fact that the US is at war and plans to be at war for an indeterminate time. I'll give them a culture of death, right up their asses with my foot.

These men assume that pregnant women in their last trimester of pregnancy must wake up one morning and decide to have an abortion. I don't know what kind of women these sleezeballs associate with, but late term abortions are not the norm. We women know that these men conjure up scenarios that are completely ridiculous and that women with serious health risks during pregnancy may be sentenced to death if a total ban on late term abortions is signed by the courts regardless of the health and safety to the woman. There are no numbers available as to how many women undergo late term abortions but it is safe to assume that serious health issues lead up to such a decision. Anti-abortionists do not seem to care about women's health.

It's all political.
Posted by Liz Blondsense at 5:29 AM

Right on! 28,ooo per year in the US have late stage, third trimester pregnancies of 20 weeks+ and "Fetal Demise". The most horrible health and family event in a woman's life. There are a number of these cases, don't know how many, that do not resolve themselves with the body expelling the fetus naturally. The only treatment for women who do not naturally abort is abortion. Criminalizing late term abortions, putting up all the barriers to abortion that already exist is a threat to women's health. and this is why Ireland recently voted to legalize abortion. https://www.irishexaminer.com/analysis/how-the-death-of-savita-halappanavar-changed-the-abortion-debate-461787.html