Bush: What Me Worry? 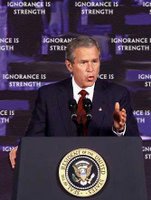 "WASHINGTON - President Bush on Thursday sought to calm an uproar over an Arab company taking over operations at six major American ports, saying "people don't need to worry about security.""


And everyone breathed a sigh of relief.


UPDATE: This just came over the AP

Levin also charged that the UAE has an "uneven history" as "one of only a handful of countries in the world to recognize the Taliban regime in Afghanistan." He added that millions of dollars in al-Qaida funds went through UAE financial institutions."

Then bush charged that no one had a problem with the ports being run by the British company, so what is the big deal.

Well the difference is that "London-based Peninsular and Oriental Steam Navigation Co., which previously operated at those ports, is a publicly traded company while Dubai Ports World is effectively controlled by the government there."

But bush never adressed the questions about The UAE's links to terrorists.
Posted by Liz Blondsense at 10:08 AM