Bush To Objectors: Shut Up

The president said that he would veto any legislation that would prohibit Dubai Ports in control of 6 major US ports.

More senators and governors are speaking out against this idiocracy of the bush administration. Long Island's only Republican congressman, Peter King, chairman of the Homeland Security Commitee has vowed to fight the administration. Governor Corzine of NJ has joined the governors of NY and MD in the fight to stop this from happening. Even Dennis Hastert and Bill Frist called for a moratorium on this most secretive deal.

Bush has said that forbidding a UAE company from doing business at the ports may be viewed as discriminatory.

UPDATE: Oh get this: Bush Unaware of Ports Deal Before Approval 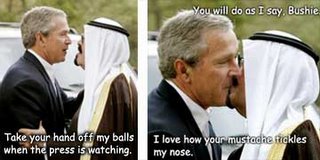 Welcome to Blondesense Blog, Flame!
Posted by Liz Blondsense at 5:03 AM