Birth Of A Movement 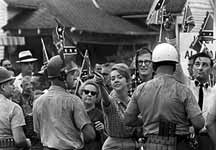 Never before seen (by the public) photos from Birmingham News of the civil rights movement have been found in the news archives. Take a look at the photo galleries from c.1962 at the amazing struggle and fortitude of black people in the south to simply be treated like human beings.

My memories of this time are from listening to the radio my mom always had on in the kitchen. We heard of the "negro uprisings" in the south and the painful movement for desegregation. I remember wondering why the heck those negroes were causing such a stir and then I asked mom what a negro was. She explained that they were "colored" people- the dark skinned people and that in the south, black people couldn't sit near white people on buses or restaurants. She explained segregation. It finally dawned on me that black and white people were considered different. Up until that point, I had played happily with black kids at the playground and never gave it a thought. As far as I was concerned, some kids had dark kinky hair made orderly by those little braids in their hair. That's all. I wasn't taught to hate these people nor were black people ever pointed out as different. Then of course, as time went by, the shit really hit the fan in the mid-late 60's and I learned a lot about man's hatred for his fellow man.

These pictures brought to my eyes the painful struggle that went on in the south and to a lesser extent here in the north. Fear and hatred are taught.
Posted by Liz Blondsense at 9:53 AM