at war with blogs and blackberries

"US Defense Secretary Donald Rumsfeld announced sweeping plans to fight the war on terror in the media with information campaigns that target Internet blogs as well as traditional news outlets. "(AFP) 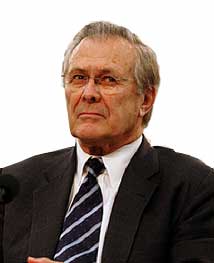 Today Donald Rumsfeld announced that the US is not as good at manipulating the media as al Qaida is. (You could have fooled me.) Rumsfeld believes we need to get up to par with al Qaida and use new weapons (but what about the bazillion dollar defense industry?) to fight terrorism like: Email, Blackberries, Instant Messaging, Blogs and traditional news outlets.

"And in this war, some of the most critical battles may not be in the mountains of Afghanistan or the streets of Iraq, but in newsrooms -- in places like New York, London, Cairo and elsewhere," he said in his prepared remarks.

Oh goodie. They are going to bring their propaganda to newsrooms and fight a war. Like this is something new.

Principle of Fascism Number 6: A controlled mass media.
Under some of the regimes, the mass media were under strict direct control and could be relied upon never to stray from the party line. Other regimes exercised more subtle power to ensure media orthodoxy. Methods included the control of licensing and access to resources, economic pressure, appeals to patriotism, and implied threats. The leaders of the mass media were often politically compatible with the power elite. The result was usually success in keeping the general public unaware of the regimes’ excesses.

Posted by Liz Blondsense at 2:41 PM