And in blonde news... 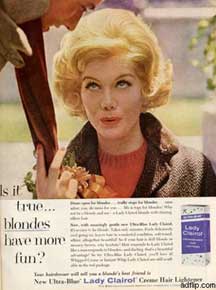 THE modern gentleman may prefer blondes. But new research has found that it was cavemen who were the first to be lured by flaxen locks.

According to the study, north European women evolved blonde hair and blue eyes at the end of the Ice Age to make them stand out from their rivals at a time of fierce competition for scarce males.

The study argues that blond hair originated in the region because of food shortages 10,000-11,000 years ago. Until then, humans had the dark brown hair and dark eyes that still dominate in the rest of the world. Almost the only sustenance in northern Europe came from roaming herds of mammoths, reindeer, bison and horses. Finding them required long, arduous hunting trips in which numerous males died, leading to a high ratio of surviving women to men.

Lighter hair colours, which started as rare mutations, became popular for breeding and numbers increased dramatically, according to the research, published under the aegis of the University of St Andrews.

read on if you dare
Posted by Liz Blondsense at 10:39 AM