Well, women are less free today than they were yesterday. It happens slowly, not quickly like the executioner's ax, but more like the magician's saw cutting a woman in half. Reality isn't always what it appears to be. Watching Roe v. Wade go down the drain is like yelling at Janet Leigh in Psycho not to stop at Bates' Motel. You know how it ends but you can't get her attention. She checks in that spooky looking place anyway. Don't say we didn't try to warn you. 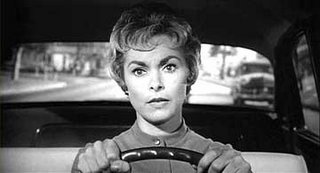 Yesterday, the Supreme Court handed us an opinion that did something while appearing to do nothing. The press said the Court ducked making a decision on abortion. Not true.

The Court knows that abortion rights days are numbered. Like any other bureaucracy, always mindful of the appearance of functionality and consistency, the Court is concerned with appearances. Why appear to make a decision that will simply be reversed next year? If the Court appears to side step the issue, they can make the calculated effort to overturn Roe v. Wade less obvious, less disturbing. Overturning Roe v. Wade can appear to be nuanced, reasoned jurisprudence rather than the political upheaval and war on civil rights it really is.

Martin Garbus, writing in The Huffington Post, explains it so that it is painfully honest. He is the only commentator that got it right.

The Supreme Court, in its 9-0 opinion, stated that the circuit court's decision, while wrong, was understandable because it was based on a previous Supreme Court case, Sternberg v. Cathart. That case held Nebraska's Partial Birth Abortion Act unconstitutional because it did not say that if the woman's health required it then the partial birth abortion would be appropriate.

Why then, did the Supreme Court not affirm on the basis of the Sternberg decision?

Because the Supreme Court knows that the Sternberg decision is soon to be reversed. Sternberg was a 5-4 decision. Alito replaces O'Connor. Justice Kennedy, who was in the minority in Sternberg, will be in the majority, and partial birth abortions will then be prohibited.

Today, the Supreme Court, in conference, will decide whether or not to take the case that will immediately reverse Sternberg.

And then, when the Parental Notification Act comes up to the Supreme Court, the Court will accept the placing of such obstacles to the teenager's attempt to get an abortion that her right to do so will be strangled.

Women are like the unsuspecting Janet Leigh in Psycho. Women think they are free to drive their own car, plan their own route, but they never anticipate that Norman Bates, armed with his butcher's knife, will work out his issues with women and their bodies on them. The ironic thing is women trusted that they had won the battle, secured their reproductive freedom and they could rest easy, sleep tight, that their rights, once gained, will remain. A happy ending with equality. They are surprised to learn that other plans had been made.

By Jaye Ramsey Sutter
Posted by Liz Blondsense at 9:31 AM