A Burqa Ban In The Netherlands? 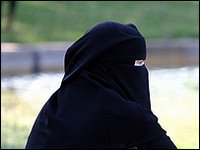 Yeah, the burqa's are kind of creepy to a westerner. If I saw someone coming down the street wearing one of those on a dark night, I'm not sure I wouldn't hesitate to cross the street. How do I know that's a religious woman under there? It could be someone pretending to be a woman who wants to mug me. I haven't heard of that happening but it's entirely possible. I used to wonder that if in Afghanistan that burqas were a great disguise for terrorists. Nevertheless in the interest of religious freedom in a western country, I wouldn't necessarily condone a ban on burqa's unless there was a rash of impostors running rampant in a community.

The Dutch government is considering a ban on burqas. Only about 50 women in the country wear them regularly, yet it would become illegal if the ban goes through.

There are a lot of opinions on the burqa and the niqab (they veil the face totally). Many see it as a symbol of oppression. (I do.)

Others say that you can't integrate into society when you are covered from head to toe. There is also the concern that in this age of terrorism, everyone should be identifiable. On the other hand in the name of religious freedom, many believe that governments should stay the hell out of a person's religious practice. Some people I've met think that Muslims should stay out of western countries if they choose to live in the middle ages. The Dutch are seriously considering banning burqas in "public places like stations, airports and cinemas - something many Muslims will regard as provocation in a Europe increasingly uncertain of its own identity." hmmmm.

As a New Yorker, I am used to seeing people wearing religious garb. Personally, I think nothing of it however I have not seen people wearing burqa's. I imagine that they would be seen as highly suspicious in a NY airport. Sure it would cross my mind that I wouldn't want to fly with a totally concealed person.

I am more afraid of a scared American citizen carrying a gun. Why is it so patriotic to want to carry a side arm? When I was out west last year, I met people who said it was great to get away from New York into the real America where they could carry guns. Jeez, New York City subways are scarier than anything in Arizona... well except for the knowledge that people are running around with concealed weapons. I saw some signs on bars and restaurants asking that you check your side arms at the door. I thought it was some sort of Old West tourist thing, but no, it was for real. Well at least I knew I could eat lunch without fear of being shot.

Check this out. A Homeland Protection System you can buy.
Posted by Liz Blondsense at 11:28 AM