Alito in, women's rights out

He told them: "We shall prevail."

By phone, President Bush told a group of abortion opponents, "we're working to persuade more of our fellow Americans of the rightness of our cause."

"And history tells us that with such a cause, we will prevail," he added. 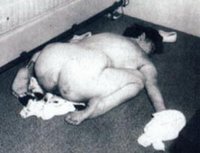 Well, that's it. The triumph of religion over science, of faith over reason is near. Bush got his two terms, got his two Supreme Court justices, and the Far Right, a political and social minority, will prevail over women's rights and the majority of the country.

Tomorrow it becomes a done deal. All we need to do now is bet which case will give the Supreme Court the opportunity Bush has sought. We don't have to wait until next year. It could come at the end of this session of the Court.

By June, women may very well be forced to carry a pregnancy to term. They may be forced to give birth whether their health or life is endangered.

And if you aren't scared enough, birth control pills are next. And if you think that is wrong and that is crazy, click here to realize that you haven't been paying attention. How much do you have to lose before you believe that women really will lose? If you don't realize it you may well be caught up in such denial that you don't realize that the clock is ticking on birth control pills and other forms of contraception. Because the fetus and unwanted pregnancies are much more important much more desirable than the rights of women.

As mentioned before, only a few methods of birth control called contraception are truly contraceptives. These are the condom, the diaphragm, the cervical cap, and the anti-sperm agents. While these methods do not cause abortions, a Christian couple should still weigh the facts carefully and consider Scripture before deciding to use one of them.

Although abortifacients and contraceptives are not the same thing, it is a mistake to assume that they are not related. Both have so much to do with how we view Christian marriage and children. Society views children as a burden; the Bible views them as blessings and gifts (Psalm 127:3-5).

Before you decide that contraception is what you really want, ask yourself, "In light of Scripture, why do we want to deny ourselves blessings and gifts from God?" Ask yourself, "Can we plan our family better than God can?"

We invite you to join us in the conviction that children are among the most wonderful blessings and gifts in the world. We believe that God can plan our families infinitely better than we ever could!