The General liked my new twist on the game Twister (NeoCon Twister) so he posted it on Jesus' General's GOP MART Store.


GOP children can have some fun and learn that what went on at Abu Ghraib certainly was NOT torture.

And Now An Uplifting Christmas Story From New York: I heard the thump thump thump while I was looking through my telescope. I looked up by the chimney to see if it was Santa. Nope. I heard it again. It sounded like reindeer. But no. It seemed to be coming from the garbage cans. I tiptoed to the garbage cans with my red flashlight. Oh my, a Christmas miracle! Protein! 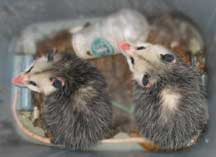 Since the gays and the christians have been giving Ford such a hard time and the husband is wondering if he will even have a job by the time xmas comes because there is no business and we crave some meat with our pasta and gruel occassionally, a miraculous event occured last night. Rather than hunting for road kill, the road kill somehow fell into my garbage can and it was fresh and juicy because someone left the lid off after they threw their latte in it and how the hell did he get the money for Starbucks when we are starving here? Here are the makings for a christmas possum stew. Mmmm mmmm.

UPDATE: So many readers sent us roast beefs, salmon, bacon, spare ribs, oven stuffer roasters and turkeys that we let the little critters go to be free to feed on other people's garbage. Run along little varmints, we'll always have pictures to remember you by. Now we're just waiting to hear about another job interview.

---------------------
Another uplifting story appeared on the cover of this morning's Wall St Journal. Little Sisters of the Poor (nuns) in Pittsburgh who run a home for the elderly poor (70-100 yrs old) can be found begging for food in a produce warehouse. It was quite a touching story of how they take care of old people, each given a personal room, dressed and washed each morning and fed well thanks to the contributions of others. Apparently they like to beg.

Speaking of begging, on the cover of Part II of the WSJ is a rather disturbing story. Harvard has an endowment of $26 billion. Many other universities have tremendous endowments as well.... they dwarf some countries' economies. Harvard has more than the GDP of Bulgaria. It's a wonder they charge such high tuition. They hardly even spend any of the money. Makes you wonder what their true goals are.
Posted by Liz Blondsense at 9:41 AM