One War Is Almost Over

The war against torture was won. Sort of. 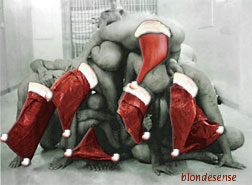 Sen. John McCain's language which has been stalling the defense authorization bill that would prohibit "cruel, inhuman, or degrading treatment or punishment" of anyone in the custody of the U.S. government, was supported by the House yesterday on a 308 to 122 vote reports WaPo this morning.

The Defense Department doesn't care for McCain's language, (can you imagine what they would like to put in there instead? Some good old fashioned double speak?) but the language grew out of the Abu Ghraib prison abuse scandal, which was nothing more than silly fraternity type pranks as reported by some outspoken conservatives who never served in the military.

The administration is still trying to push through some exceptions although Scottie is likely to spin that. There are also some Republican leaders who don't wish to go against the president. I would like their names please.
Posted by Liz Blondsense at 9:52 AM