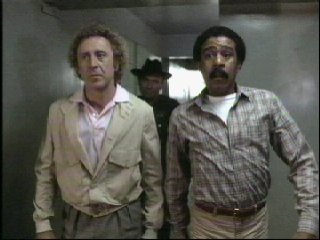 I just got home and saw that one of my heroes died today. It's down at the bottom of the "today's news" on the left-hand side of the blog, too.

Fucking Dick Cheney, the most evil fucking cyborg motherfucker in the UNIVERSE --- that cocksucker will NEVER DIE --- but Richard Pryor kicks at 65.

Further proof that there is no justice in the universe.

And yes, I have a pretty good idea of how much pain & suffering he'd endured these last few years, and I'm sure that he's probably really fucking relieved, wherever in the universe he may (or may not) be.

Richard Pryor (I know, this will come as a shock) was one of my earliest influences. Him, Brother Dave Gardner (the 'be-bop preacher'), "Sanford & Son," and Bill Cosby's second album, "I started out as a child..." --- that's where I got this twisted/jaded/fucked-up sense of humor. Sure, Lily Tomlin, Gilda Radner, those influences weren't far behind --- but Richard Pryor and Redd Foxx were the ones who permanently imprinted my brain.

And to be felled by a mere heart attack --- it's so... anticlimactic. If you've seen "Live On The Sunset Strip" a few dozen times, you know that the guy who runs down the street ON FIRE is a little more than ordinary. The guy who murdered his own car with a .357 magnum --- can't just croak. It's so... pedestrian. Anybody who survives exploding freebase, multiple heart attacks, and 19 years of Multiple Sclerosis --- can't just DIE.

According to CNN, his wife (number 12? Thirteen?) tried to revive him from a heart attack as the ambulance was on its way. Personally, I'd rather believe that Richard Pryor went out the same way that his father did --- with an orgasm and a nasty smile. Coming & going at the same time.

The world will never be the same, and no one can fill those shoes. Oh, sure, every time there's a hot new black male comic, "he's the next Richard Pryor" --- but there will never be another one like that. And Chris Rock can kiss my ass.

The assholes of this universe go on forever, but the good ones are taken too soon. Doesn't it just fucking figure?
Posted by Anntichrist S. Coulter at 5:54 PM