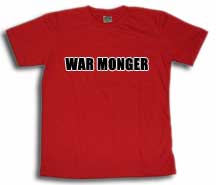 Today is "Red Friday", a fabulous title with an ironic double meaning.

An email is going around encourging us red blooded 'Murkans who support the troops, the war, the country at war, their kids going off to war for the god of war, to wear red on Friday's. This will make the pussies who hate their country literally see red in a sea of red.

One email says, "Many Americans, like you, me and all our friends, simply want to recognize that the vast majority of America supports our troops...Every red-blooded American who supports our men and women afar, will wear something red. "

Groovy meme. Red symbolizes all the blood being shed overseas so it's a good reminder to wear red to symbolize the blood, the gore, the loss of life, in the name of god only knows what but I don't care, because a good American loves a good old fashioned war.

The email ends with, "The first thing a soldier says when asked "What can we do to make things better for you?" is..."We need your support and your prayers." Let's get the word out and lead with class and dignity, by example; and wear some thing red every Friday."

Indeed. My brothers and sisters, lets be 'dignified' and wear the color of blood every Friday starting today. We wouldn't want our troops to think that we don't support them.

I say we encourage Congress to send more bullets, more body armor and armored vehicles to show our support of the troops.

I say we encourage Congress to demand that the war generals come up with a war strategy too. I think the troops overseas would really dig that. Better late than never.

I say that we encourage Congress and the Executive branch to show their support for the troops by sending at least one family member to the front. I'd like to see the corporate CEO's, the stockholders, the "journalists" who shill for the government, and the war planners in the pentagon either enlist, re-enlist or send a family member to the front.

I want to see my president, the commander in chief, stand in a battle field (he can wear body armor and carry a gun, of course) and lead our troops to victory! By God, the real patriotic Americans did it in WWII and they should do it now.

Please join me in song...

God bless America, land that I love. Stand beside her, and guide her through the night with a light from above...

-Tip of the helmet to Lalock.
Posted by Liz Blondsense at 7:57 AM