our first picture of the moon! 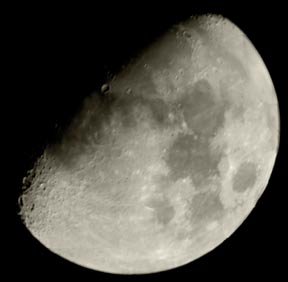 
As many of you know, we are but a spec in the universe. That's why I bought the Meade LX90, 8", F/10, Schmidt-Cassegrain telescope over the summer. It was billed as a scope you just plug in, hit a button and it will go where ever you want it to go. It's computerized. I am fairly computer literate- so how hard could it be? Well it didn't have a blonde warning. Needless to say, it took about 3 months for us to figure it out. It was worth it as I almost passed out when I first saw the Great Orion Nebula.

My dream was to learn astro-photography. The internet is a huge resource for tips on getting started with astro-photography. The learning curve is steep despite what some say. My goal for the past month was to start by getting a half way decent photo of the moon. That's where amateurs are supposed to start. Who am I to argue? I missed the awesome crescent moon last week because I had learning curve disability with a new SLR digital camera. Then the weather went bad. So we have the waxing gibbous moon instead.

Last night, I had the Eureka! moment when I realized that the telescope was an F/10 lens and I had to set the Nikon SLR to manual mode (M). After futzing with the speeds for an hour, images of the moon started to appear on the camera display! It was cold. It was windy. My cat couldn't decide if he wanted to be out or in.

Billydoom and I were elated. We jumped for joy. We admitted that it was rather arousing. Our largest eyepiece only got a small part of the moon, so we had to take multiple shots and piece them together in photoshop. The photo, while nowhere near what an experienced astro-photographer would consider a good image, was a darn good start for us. Let us rejoice!