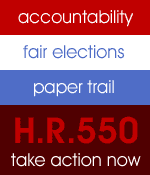 
And why did Ohio's Republican Secretary of State, Blackwell, co-chair for the Bush/Cheney campaign, refuse to allow non-partisan observers access to monitor the Ohio vote?

Not only that, Blackwell rolled out the Diebold voting machines that were decertified in California's Secretary of State because they failed in the largest test ever.

How could the exit polls, which were previously so right on, be so off in Ohio?

Paul Krugman of the New York Times writes: "It's election night, and early returns suggest trouble for the incumbent. Then, mysteriously, the vote count stops and observers from the challenger's campaign see employees of a voting-machine company, one wearing a badge that identifies him as a county official, typing instructions at computers with access to the vote-tabulating software.

The 2005 election in Ohio once again was full of corruption and deceit despite the outcry of Ohio citizens. What gives? And why do voting machines that leave no paper trail allowed anywhere in this country, a supposed democracy. Read Has American Democracy Died An Electronic Death In Ohio 2005's Referenda Defeats?''


On February 3, 2005, Rep. Rush Holt reintroduced the Voter Confidence and Increased Accessibility Act (HR 550), a bill designed to restore confidence in the outcomes of elections and in our electoral process generally.

Paper Trail: The measure would require all voting machines to produce an actual paper record that voters can view to check the accuracy of their votes and that election officials can use to verify votes in the event of a computer malfunction, hacking, or other irregularity. Experts often refer to this paper record as a “voter-verified paper trail.”

If you have a web log, please put this important information on your blog and keep it there. Tell your friends and neighbors. It doesn't matter what political party. This is democracy.

Thanks to the blogger formerly known as GD Frogsdong for instigating this blogswarm.
Posted by Liz Blondsense at 9:51 AM