BEIJING- "People should feel comfortable about expressing their opinions about Iraq," Bush said, three days after agreeing with Vice President Dick Cheney that the critics were "reprehensible."

The president also praised Rep. John Murtha, D-Pa., as "a fine man" and a strong supporter of the military despite the congressman's call for troop withdrawal as soon as possible.

Bush went on to say:

"I heard somebody say, `Well, maybe so-and-so is not patriotic because they disagree with my position.' I totally reject that thought," Bush said.

"This is not an issue of who's patriotic and who's not patriotic," he said. "It's an issue of an honest, open debate about the way forward in Iraq."

Hmmm. Even a blonde could figure out that the hawk's argument against the Democrats "You screwed up because you trusted us" was rather lame.

The article also said he was suffering from jetlag.

UPDATE: Speaking of jetlag, Missouri Mule sent me this link and there is a video of the Chimperor trying to escape from reporters. oh god. 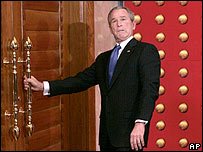 Excerpt: President George W Bush tried to make a quick exit from a news conference in Beijing on Sunday - only to find himself thwarted by locked doors. The president strode away from reporters looking annoyed after one said he appeared "off his game". President Bush tugged at both handles on the double doors before admitting: "I was trying to escape. Obviously, it didn't work."
Posted by Liz Blondsense at 4:12 PM