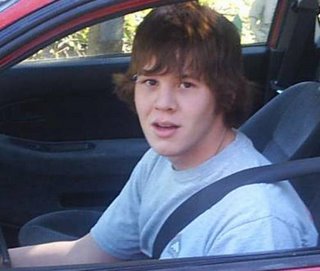 This is my nephew. He was supposed to be 18 today, but he was murdered on May 6th of this year. The blurry photo on the far left is the last picture ever taken of him (camera phone) on the day he died. He's wearing my Ramones t-shirt.

Liz is probably going to kill me for this shitty layout, but c'est la vie. 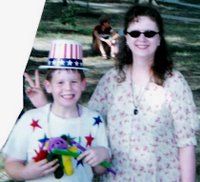 My nephew's murderer still walks the streets of Lousiana, because his grandmother has the right amount of money and connections. This is the same woman who has been physically assaulted by her demon-seed grandson, nearly bludgeoned to death by him, and she also allowed him to throw drug & alcohol parties (where all attending were under 18 years of age) on her property and in her house. Normally, I'd feel sorry for the old woman, but since a corrupt "sheriff" (if he's a lawman, I'm an anorexic supermodel) does exactly what he is told to do in this bass-ackwards, hick-ass parish, the fix was in before Tater's body ever hit the ground. No one will ever be punished for robbing this boy of his life, even though the blame goes far and wide.

To his so-called "parents," for abandoning that child from day one; an alcoholic cokehead "father" who was NEVER there, a skanky whore of a "mother" who had sex on the floor, right next to her toddler children, and who allowed FIVE subsequent step"fathers" to physically ASSAULT Tater, because having a dick with a paycheck was far more important than mere OFFSPRING. To my so-called "parents," who had legal custody of Tater for the past ten years of his life, since the idiots who spawned him couldn't be bothered --- when they hit retirement age, they decided that a teenaged grandson was far too inconvenient to their plans to buy a huge RV and hit the road, so they left him to the wind. To the mouth-breathing, knuckle-dragging illiterate who called himself a junior-high principal, who harrassed this boy, a STRAIGHT-A STUDENT, every fucking day for THREE YEARS, instead of ENCOURAGING HIS POTENTIAL --- to the point that a talented writer and excellent mind grew so disgusted with the very concept of school that he dropped out. To the corrupt, alcoholic, borderline-psychotic "sheriff" who is still more worried about his tax base and his income and his EGO than the lives of the people he is sworn to protect. To every piece-of-shit amateur "cop" in this hillbilly parish who ever harrassed, abused, and otherwise persecuted my nephew, for no reason other than his SHITTY TASTE IN "FRIENDS."

And to me. For being so wrapped-up in my own psychoses and failures and inadequacies and loneliness and loss that I missed damned near every opportunity that I had to help Tater. To help his sisters, as well as his cousins. I fucked up. I gave them presents, but I could have given him a home. I couldn't gotten that boy out of the street, but no. I had to follow my own jokes of "dreams" and fuck it all up even worse. It's a complicated story, all the bullshit that stood between me & those three kids, because of their supposed "father." Another time, perhaps.

But aside from all of the excuses, aside from all of the shit, stands the fact. He's gone. The biggest heart, the funniest warped sense of humor, the sharpest mind, the most gentle and giving personality that I have ever known, the one boy who gave me hope for the future of men, period. Gone. Stolen.

By a maggot who posed as his "friend."

And the fake-ass cops fixed it all before the crime-scene people from the State Police ever showed up, and half of the evidence from that scene was "lost in transit."

Yes, as the cold-hearted murder of New Orleans has shown us, this shit still happens. I'm sure that it's not JUST in Louisiana, but it's so in-your-face BOLD here, so flamingly obvious and so blatantly ignored --- it blows every half-sane mind who has to see it.

I wish that y'all had known Tater. Nobody who did will ever forget him. The last conversation that I had with him, the night before he died, he & I argued about music ("The Game" & "Fifty Cent," in particular), like we always did. He was the one kid out of 7 (nieces & nephews) who cared about music as much or more than I did. He bullshitted me, and kept me going, believing that he'd gone to Biloxi to see the Motley Crue reunion tour --- for twenty minutes. I was in shock, naturally --- I mean, it IS Motley fucking CRUE here --- but then he laughed, like he always did, and his voice got silly & squeaky (teenaged boys and their mercurial voices) and he said, "Awww, man, I didn't go to no damn Motley Crue concert --- I can't believe you believed that!"

And the last words that I heard him say, as we were getting off of the phone, was "I love you."

It's just not fucking fair.

That kid could've been anything... he already was so much.

I went to his grave today, with the Beastmaster & her Dick (my alleged "parents"). And of course, none of it was about Tater. Or even about spending a minute with Dicksie & Rachel, the sisters he left behind. It was all about THEM, and their egos. I never even got to see Rachel, because her every waking moment doesn't revolve around paying homage to THEM. She was coming over there to see her Bubbie, but not fast enough to suit THEM.

And as much as it kills me, to leave him over there, two hours on the other side of the river, I know that he's not there. He wanted to be cremated, anyway. But then, nothing about his life, or his death, was ever about what he wanted, either.

Tater was the one who started my rubber-duckie collection, one Xmas. It was a $1 baby toy from the Dollar General Store, but it gave me such joy... And then I discovered Devil Duckies, and it was all collectioneering from there on. I ordered 2 Devil Duckies for his grave, but of course, since we have the world's most retarded post office, I won't be able to get them until Monday. But as soon as I can buy the gas to get over there, I am SO taking a bottle of Gorilla Glue and permanently-attaching them to his crypt.

(He's buried in West Bumfuck, LA, behind a HICK-ASS WHITE TRASH PENTECOSTAL CHURCH--- that Tater LOATHED for the preacher's hypocrisy--- so I know that somebody will try to "exorcise" the ducks with horns from his grave. Good luck, fuckers. I'll post pictures when the mission's accomplished.)

Thank y'all for letting me bitch & whine. Who else would listen to this shit?
Posted by Anntichrist S. Coulter at 3:15 PM