This Week In God

1. An excerpt from "Vows: The Story of A Priest, a Nun, and Their Son," a new book by Revealer contributing writer Peter Manseau. Manseau tells the real story behind one of the Boston priest abuse scandal's headlines, that of his mother. As a teenager, Mary Doherty fell under the spell of a charismatic priest, Gerard Creighton. Creighton seduced Doherty; then, in order to assure her silence, he arranged to have her dentist remove her teeth. Decades later, Doherty -- now Mary Manseau -- undertook her own investigation.

4. World at War, parts I and II: Erica Ogg and Michael de la Merced look at what gets left out by the secular coverage of evangelical blockbuster "Left Behind: World at War."

Dan Brown, author of the Da Vinci Code, is being sued for stealing the idea that Jesus and Mary Magdalen were married. Two historians, Michael Baigent and Richard Leigh, are suing Brown's publishers, Random House, claiming that Brown lifted "the whole architecture" of the research from their 1982 book, The Holy Blood and the Holy Grail, for The Da Vinci Code, Brown's global hit of a religious thriller. 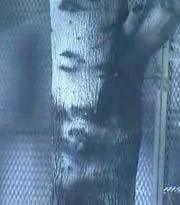 I don't see him, but Jesus supposedly appeared on this tree. The story says, "People who have looked at it believe they are face to face with the face of Jesus Christ." I think it looks like Che. 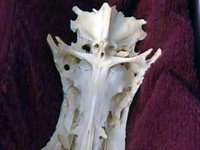 The Newmans said they received the fish bone from a friend 10 years ago, and they've had good luck ever since. Now, they said it's someone else's turn. It's on ebay.
Jesus looks frightened. Oh No! Mr Bill! Noooooooo!

~~~~~+++~~~~~
Speaking of Ebay, A central Indiana congregation that sold a vacant church on eBay for $40,000 is donating the proceeds to victims of Hurricane Katrina.

VANCOUVER - A B.C. Supreme Court judge has awarded a 45-year-old woman $15,000 in damages after she was assaulted with a kiss. The former nun and school teacher has a neurological illness that has confined her to a wheelchair.

After an April 2002 physiotherapy appointment, her volunteer driver, Harry Battle, placed her on her bed, gave her a deep kiss and rubbed her back under her shirt...

...In the civil suit, B.C. Supreme Court Justice Richard Goepel ruled Battle's act constituted a serious breach of trust from a caregiver. He noted that after the assault, the woman didn't leave her home and stopped going to choir and horseback riding.

Roman Catholic priests in manchester, NH reach out to the community and look for new parishioners in local bars. Love it. They're looking for lapsed catholics in the right places.

~~~~~+++~~~~~
Oh you will love this article from Pravda:
Centaurs appeared after copulation between humans and animals

"In ancient times, warriors took a flock of sheep or goats for every battle; they used animals for eating and having sex. There is written evidence saying that Italian soldiers deserted during the siege of Lyons by catholics in 1562 because they had little sheep for sex contacts. Allowing sex contacts between soldiers and animals was believed the lesser evil than sex with prostitutes. Respectable scholars - Paracelsus, Cardano and famous accoucher of the 16th century Fortunio Liceti - several times registered birth of hybrids, animal kids born by humans and human kids born by animals. Their notes mention horses, elephants, dogs and even lions."

~~~~~+++~~~~~
Here's a story for the guys: do you feel left out by all those powerful women in church? Is church too "gay" for you? Read: "Macho Christianity? Movement seeks to make church 'more masculine'"

One man after joining the movement to make Christianity more "macho" realized that his wife "craves" his spiritual leadership. "So now after dinner, I take my family by the hand to say, 'It's time for family devotions."

I don't think it's your spiritual leadership she craves, macho man. Excuse me while I puke.

Unknown said...
This comment has been removed by a blog administrator.
11:37 AM