2005: "Tacky Tourist From Hell (In a half-assed Party City costume)" 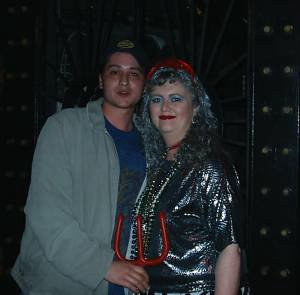 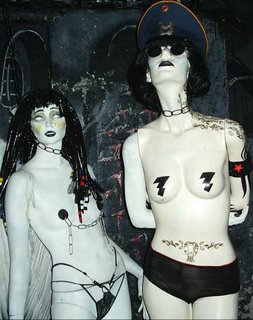 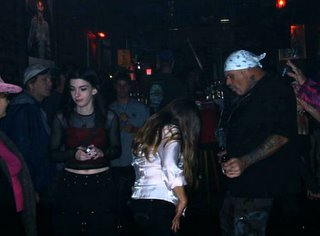 How do y'all like the mannequins that have replaced me in the Spank Tank? Pretty damned artistic, I'd say. I especially like the Marilyn Manson doll. Not to mention the new and exclusive paintings by Siniard, French Quarter artist of the royals. (That would be the bluish pic with the satyr grinning in the background.)

Chicky (owner of the Dungeon) and Steve (former manager of the Dungeon, way way back in the day) were the only ones at the party who "got" my costume. The Mardi Gras beads (in OCTOBER) were the main clue. Only tourists buy beads on Canal Street to wear into the Quarter in any other month but February (or March, if it's a late Lent). At any rate, I only dressed up for the "locals" anyway, seeing as how I used to be one. Sadly, none of the NOPD on Bourbon Street (ya gotta get out and walk once in a while, but not TOO far) understood my costume, but then, some of them looked half-in-the-bag, anyway. Nothing new there.

There were, maybe, thirty-five or forty other people on Bourbon who WEREN'T New York State Troopers or NOPD. And judging by the anecdotes told by the locals who live and/or work in the Quarter, the NYST do NOT want to be there, and they are NOT amused by any of it. Sad to hear, really, considering how NOLA & NYC have always had this kind of grudging respect for one another, one ancient city to another. A lot of the same condescending/insulting carpetbagger rhetoric that came from FEMA and Dumbya post-Katrina. And don't even get me STARTED on The Cunt Mistress Of Evil, BARBARA Bush... If that death-snatch opens her mouth again any time soon, I could wind-up on the news or in prison, or both.

On the one hand, I wish I could return to the Quarter tonight, to see if any more locals make it back, because Halloween in the Quarter is the last holiday that is still FOR the Locals --- look at Mardi Gras, Jazz Fest, even French Quarter Fest! Plus, the locally-owned businesses in the Quarter (quickly becoming even MORE of a minority) need the dough and the company.

But on the other hand, I am SO too old for this shit! (I don't mean that in any "maturity" connotation, obviously, I mean that the fibromyalgia from taking that much ginseng, B-12 and DayQuil is WAY worse than a hangover!!!) But the few people I still know in New Orleans, especially at the Dungeon, were glad to see us, and we were so glad to see them. Sure, there was definitely a twinge of "we're dancing on the graves of the freshly-murdered" when I first rolled into that ghost town... but facts are facts, and the facts are these: 1. I'm homesick as a motherfucker, and 2. The Quarter needs the business to stay alive, and the Quarter is the only part of town that's received ANY reconstruction/revival help from ANYBODY thus far. And yes, I'm including Kathleen Blanco in that statement. More bitching about that in the other post.

We had a lot of fun, went home way too early (way too many fucking COPS out there for me, dammit), and wish we could do it again. And yes, I'm wearing Chuck Connors All-Stars with my costume, because I am DEFINITELY too old to do heels on the Rue Toulouse!!!

Besides, I kinda had to keep it low-rent, and if this costume is to bear any fetishistic/luck/voodoo value, as far as dragging drunk rednecks/Yankees/Californians with gold cards back to the Quarter, I wanted to be at LEAST equal-opportunity about it! And remember, those of you who are brave enough to sally forth to NOLA in the near future: If you can't afford to TIP, you can't afford to DRINK!!!

So be good to your bartenders, dammit.
Posted by Anntichrist S. Coulter at 3:15 PM

Unknown said...
This comment has been removed by the author.
10:35 PM