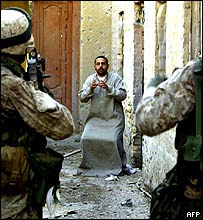 A family came to me last night, asking if I knew anywhere they could get hold of some food.
When I mentioned that Palestinian leader Yasser Arafat had died, they were shocked.
"It's a conspiracy," they said. "They have killed him so that his death overshadows our plight in the news." -BBC Reporter

People leaving the city described rotting corpses being piled up and thousands still trapped inside their homes, many of them wounded and without access to food, water or medical aid. US commanders insist civilian casualties in Fallujah have been low, but the Pentagon famously claims it does not keep figures.

The US Defence secretary Donald Rumsfeld claimed last week that Iraqi civilians had been warned how to avoid injury. "Innocent civilians in that city have all the guidance they need as to how they can avoid getting into trouble. There aren't going to be large numbers of civilians killed and certainly not by US forces," he said.

The Iraq Coalition Casualties website reported that, as of Saturday, 1,181 US troops had been killed in Iraq. One Iraq-based report estimates civilian casualties to be 37,000. A report in the British medical journal The Lancet put the figure as high as 100,000. -Independent Report

Now for something completely different. News from America...

General Praises Speed of Fallujah Success
Maj. Gen. Richard Natonski told The Associated Press he and other planners took lessons from the failed three-week U.S. assault on the city in April, which was called off by the Bush administration after a worldwide outcry over civilian deaths.

This time the military used swarms of aircraft more than 20 types that pounded the city before and during the assault.

"We had the green light this time and we went all the way," Natonski said.

Here's a journalist's blog from Fallujah. With pictures.

Well America sure as hell showed those people, didn't we? We blew them to smithereens and we should be organizing celebrations in the streets across America now shouldn't we? We won!
Oh yeah, and it's gonna cost us taxpayers tens of millions of dollars to rebuild Fallujah, get the people back to their homes and start a democracy in Iraq with a faux election. Probably much like our democracy here in America. As long as you don't say anything bad about our government, you're safe from their wrath.