Stem Cell Research May Stop on a Dime 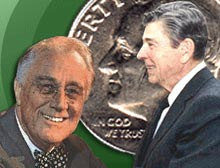 Quick Lesson on Stem Cell Research
Even if your friends are Reagan/Bush lovers, you can convince them that Nancy Reagan would prefer that Bush would permit funding of stem cell research rather than waste millions of dollars converting coins or bills to depict her husbands image. We need to get Republican Congressmen to vote for Stem Cell Research funding. Tell your Republican friends that even William Safire thinks this would be a victory for his hero, Ronald Reagan.

Scientists believe stem-cell research could lead to treatment of diseases such as Alzheimer's, Parkinson's, diabetes, spinal injuries, heart disease and muscular dystrophy. Today, millions of embryos are being thrown away that could save millions of people who are suffering from one of the diseases... possibly someone we love. Earlier this year, Mr Bush who has no clue about anything, let alone science ejected two from his Bioethics Council and replaced them with religious guys who can't think their way out of a bag. I studied moral theology in the seminary. Real live 'moral theologians' are usually doctors, lawyers and theologians simultaneously. I'm sure Bush's "scientists" were knuckleheads who read the Bible, not exactly your scientific answer to bio-ethics.

Even Republican Senators Orrin Hatch and Gordon Smith did their legal, medical, religious and ethical homework and want Bush to permit federal funding for research.

Current rules put in place by the Clinton administration allow federal money for stem-cell research using embryos if the work is funded by private money and the embryos come from fertility clinics and would otherwise be discarded.

Secondly, we don't want to look at Ronnie's mug on our money. Reagan actually quoted FDR, Alexander Hamilton, and Andrew Jackson. He liked them... especially FDR. Nancy believes Ronnie wouldn't want to be on the dime. Let us respect her. [sic] and oh my god, FDR, I learned about him in school, he was a great man.. what is wrong with these nuts in congress? who voted for them? jeebus. help me.