The Wedding Was a Blast 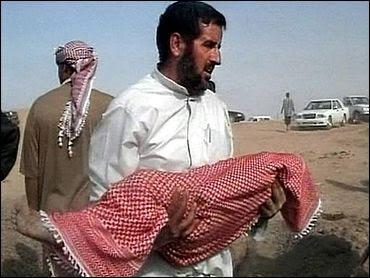 The US Military refuses to answer questions about whether or not wedding guests were killed when they opened fire on a house in western Iraq on Wednesday. The US says it was a "suspected foreign fighter safe house" and the Iraqi's say it was a wedding and as many as 45 men, women and children were killed. From the picture above, it seems that if it was a safe house, the foreign fighters were mighty tiny. Dozens of mourners got out their shovels and buried the dead. Apparently in Iraq part of celebration requires shooting guns in the air. It seems that on occasion the US can't tell if there is celebratory fire going on or if they are being attacked. Read more

This is not the first time that the US has canceled a wedding. Many weddings in Afghanistan were also attacked...mistakenly.

After Wednesday's "Shock and Awe" wedding, a man who was interviewed said, "This was a wedding and the (U.S.) planes came and attacked the people at a house. Is this the democracy and freedom that (President) Bush has brought us?
Posted by Liz Blondsense at 3:30 PM