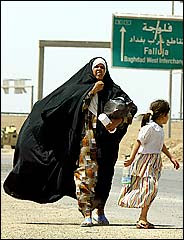 The shit is hitting the fan in Fallujah.From The Times:

While administration officials say they would like to carry out a precise attack on an estimated 2,000 hard-core Sunni Muslim insurgents, military officials say there is no way guided missiles or pinpoint bombing can do this job.

Instead, the military is planning swift raids by Marine riflemen — backed by helicopters and gunships — aimed at the insurgents' leaders and their gunmen, while encouraging others in the city to evacuate or stay under cover.

For Mr. Bush, struggling through the most casualty-ridden month in Iraq since the war began 13 months ago, the kind of operation now being contemplated is hardly the sort of painful choice his administration anticipated nearly a year after he declared the end of major combat operations in Iraq and the defeat of Saddam Hussein's government.

The president and his advisers, said officials familiar with the deliberations, are keenly aware that if the operation to root out the insurgents kills many civilians — or simply appears to when reports are broadcast on Arab networks — it could spark uprisings elsewhere around Iraq, from Baghdad even to some Shiite strongholds where tolerance of the American occupation has worn thin.

Whew. They are getting the picture now. It looks really bad when they kill innocent civilians. I know I only have the opinion of half of the country. The other half doesn't care if we kill innocent people and get really mad if you tell them that.

The stakes are too high for us to leave," Bush said on Friday evening at a campaign event in Florida. "This is an historic moment. You see, a free society will be a peaceful society. A free society in the heart of the Middle East will begin to change the world for the better. No, they're trying to shake our will, but America will never be run out of Iraq by a bunch of thugs and killers."

Know something, if I have been wrong all along and Bush has our soldiers kill each and every single evil person and it becomes a truly free society, then I am moving there. Well I can say that cause we know it's never going to happen.
Posted by Liz Blondsense at 11:41 PM