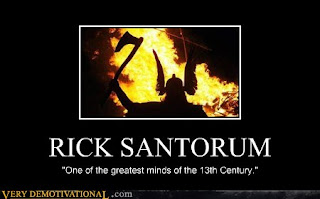 Mullah Ricky Stomps on the Competition ... Gingrich's Cri de Coeur ... What Is That Senile Fool Up To? ... The Show That Will End in Tampa?

Two huge primaries were decided back on Tuesday in two rather unlikely states, Mississippi and Alabama. A poll released just before the voting revealed something that should shock no one - that a majority of the Republican voters in those two states steadfastly believe that President Obama is Muslim, and don't believe in evolution.

Again, that comes as no surprise. Both states are deep red - meaning that Ignorance is cultivated there as a cash crop. Mississippi is the poorest state in the nation, with a high percentage of teen pregnancies and a whole raft of other handicaps (notably Haley Barbour). But on the other hand, MS does get more Federal money than it pays into the kitty in taxes, so I suppose that's a plus.

Newton "I'm Not As Fat As Baron Harkonnen, And I Have Better Hair" Gingrich considered these two states (Alabama particularly) as his "firewall," two states that he absolutely had to have in order to maintain his legitimacy as a viable candidate for the nomination. He's from Georgia and he can connect with the voters. All he had to do was campaign hard, and trust to Romney to stick his expensive shoes in his mouth.

Which Romney did, frequently and with great hilarity, from his statements about liking "cheesy grits" and catfish to his affected drawl. So it looked like Gingrich might have won, right?

Santorum campaigned like a ferret on crank, and by about ten o'clock Eastern Time was doing the weasel war dance all over the place. While proclaiming his victory in Alabama, he got word that the race in Mississippi had been called for him as well, which amped up the crowd so much I thought they were actually watching the last Crimson Tide game.

The Wannabe Mullah connected with voters down there more than Gingrich did, and at the podium finish it was Santorum on top (Eww!) with Gingrich coming in a close second and Romney breathing down his neck at third. The Two-by-Four managed that much, and his campaign had started downplaying expectations about a day before the voting actually started. Mittens got the booby prize of the night by winning the all-important Hawaii caucus.

Gingrich decided to vent his frustration, an act somewhat reminiscent of a humpback whale venting out its blowhole or a massive, blattering beer fart. It boiled down to one short sentence that any parent of a teenager will have heard at some point: "People just don't understand me!"

Not so, Newton: The problem is that people understand you too well.

All of which put Doddering Old Fool Ron Paul a distant fourth, where he's been ever since the last creep left the field. Supposedly Paul's a gynecologist or obstetrician by trade - all I know is I never want any member of my family setting foot in his practice (or his hideous clot of a son's for that matter). I just hope he's a better doctor than he is a candidate.

Rumors of some sort of backroom deal (the kind of thing all GOP candidates and voters say they abhor) between Romney and Paul started moving around, with the following basics - that at the convention Paul will throw his massive, swollen nut of 50 or so delegates to Romney, along with his endorsement and that of his merry band of minions, in exchange for Mittens putting Rand Paul on the ticket as Veep.

Which just made me wonder something: With all the bullshit about the Mormons posthumously baptizing non-Mormons so they go to heaven, did any of them give Hitler the Get Out Of Jail Free card? Just asking.

Santorum wants to debate Romney, the putative puta front-runner, one on one. Gingrich has vowed to fight on in memory of all those ragged, starving, out-of-ammunition rebels just before Lee went to meet Grant, and no one knows why the blistering fuck Ron Paul is still even in the race. It all ends in Tampa, where I hear that the strip joints are feverishly preparing pressure washers and steam hoses to clear away the tidal wave of straight-laced Good Christian Republican semen.