Conservatives Cornering the Market on Stupid 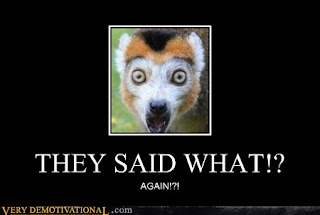 You have to wonder if they sell stock in Stupid, because if they did the price would be going through the roof right about now.

We have Frothy Mixture Santorum doubling down on the Stupid, first by dribbling that the Affordable Care Act will (somehow) lead to - hey presto! - the French Revolution and guillotines. And if that Chick Tract version of the future isn't enough for you, Ayatollah Santorum recently framed his campaign against President Obama as being just like our struggle against Hitler.

The Ayatollah didn't actually come out and break Godwin's Law, but he came close enough.

Yes, indeed. Santorum wants to impose Christian Sharia Law on the United States, stating that he wants the government and the laws to more closely conform to "God's Will" - whatever that is, and however it may be interpreted by that poltroon the Pope I guess.

But he's not the only one who's investing heavily in The Stupid this election cycle.

Newton Gingrich weighed in with the old tried and true Dick Cheney "Vote For Me Or You're All Dead" fear tactics, couching his campaign as a national security necessity, and never mind that Obama's gotten our troops out of Iraq, ordered the hit on Osama bin Laden, and authorized more drone attacks than even He Who Must Not Be Named But Is Actually George W Bush.

A state congresscreature from Indiana refused to sign on to a proclamation recognizing the Girl Scouts on their 100th anniversary, stating that the GSA fosters the homosexual agenda, supports Planned Parenthood, teaches little girls to have sex, and (gasp!) has Michelle Obama as an honorary chairman.

The entire Republican caucus in the Virginia state legislature decided to add The Stupid to its state pension fund's investment portfolio by putting together a law that would order doctors to insert a transvaginal ultrasound probe into a woman's uterus if she wants an abortion. Dana Loesch said that women who have intercourse have already pretty much given up the right to complain about anything inserted into their orifice, so why should they complain?

Currently, public outcry is causing them to postpone passage of that draconian little piece of shit, but that's only Part 1 of a triad of bills going through the Virginia Legislature - the others would forbid The Gays to adopt kids, as well as allow a Florida-style "no backing down" law to allow people to shoot first like Han Solo.

Neoconservatives, Fox News warmongers and the "liberal" mainstream media are figuring that Americans need More Stupid - or Stupid 2.0 - if the incessant beating of war drums about Iran is any indication. We let ourselves get fooled back in 2002-2003; are we really going to let ourselves get roped into yet ANOTHER land war in Asia?

Are we that stupid?

Conservatives are banking on that.
Posted by Walt at 5:55 PM