Damn! It's going to be cloudy tonight -- there's a chance "auroras could be seen as far south as Pennsylvania"

and here's another one (with great pics) from spaceweather

ONE DOWN, TWO TO GO: As predicted by analysts at the GSFC Space Weather Lab, the first of three CMEs produced by the recent spate of flare activity reached Earth during the late hours of August 4th. The impact was weak and is not expected to produce strong geomagnetic storms. Two more CMEs are still on the way and, as described below, they may have merged into a single cloud that could produce significant storming when they reach Earth on August 5th at 10:00 UT (plus or minus 7 hours). A new model of all 3 CMEs is now available; stay tuned for updates.

STRONG SOLAR ACTIVITY: On August 4th, active sunspot 1261 unleashed a strong solar flare, the third in as many days. The blast, which registered M9.3 on the Richter Scale of Flares, hurled a bright coronal mass ejection (CME) almost directly toward Earth. Click on the image to view a movie of the expanding cloud recorded by the Solar and Heliospheric Observatory:


SPOTTED SUNSETS: During the recent years of deep solar minimum, observers of the sunset grew accustomed to a blank solar disk. News flash: The sunspots are back. "The sunset conditions of August 2nd were just right to show the massive sunspots AR1260, AR1261 and AR1263 to the casual observer who happened to glance at the sun for a brief few moments," reports Stephen W. Ramsden of Atlanta, Georgia. "You could even see the penumbra with the naked eye!" He had a camera handy and snapped this picture: 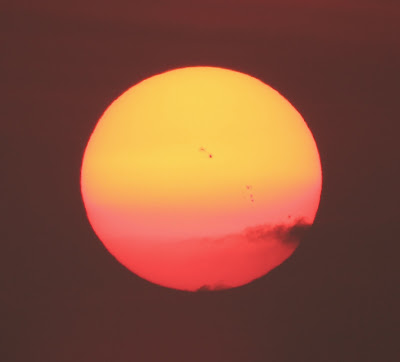 "The size and broiling movement of these sunspots just boggles the mind," he says. "You could fit every planet in the solar system with all of the known asteroids neatly inside the largest group...wow!"

GEOMAGNETIC STORM IN PROGRESS: A major geomagnetic storm is in progress following the impact of a CME on August 5th around 1800 UT. Sky watchers at all latitudes should be alert for auroras after nightfall. Tip: the best hours for aurora sightings are usually around local midnight. Aurora alerts: text, voice.

Reports of Northern Lights are coming in from many European countries including Germany, Denmark, Scotland and the Netherlands.

Analysts at the Goddard Space Weather Lab say that the CME impact may have strongly compressed Earth's magnetic field, directly exposing satellites in geosynchronous orbit to solar wind plasma. Stay tuned for updates on this aspect of the storm.


Reuters finally has the story up. says auroras may be seen as far south as Minnesota and Wisconsin.

(Reuters) - Three large explosions from the Sun over the past few days have prompted U.S. government scientists to caution users of satellite, telecommunications and electric equipment to prepare for possible disruptions over the next few days.


and from International Business Times: More Solar Storms to Hit Earth in Coming Years
Posted by JerseyCynic at 11:30 AM