Does Michelle Obama Know About This? from THE AGITATOR -- July 7, 2011

Libertarian socialist that I am, shit like this really makes me crazy.

This is a true story from Oak Park, Michigan. UFB

Their front yard was torn up after replacing a sewer line, so instead of replacing the dirt with grass, one Oak Park woman put in a vegetable garden and now the city is seeing green. 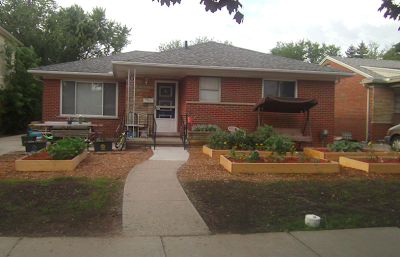 Julie Bass says, “We thought we’re minding our own business, doing something not ostentatious and certainly not obnoxious or nothing that is a blight on the neighborhood, so we didn’t think people would care very much.”

But some cared very much and called the city. The city then sent out code enforcement.

City code says that all unpaved portions of the site shall be planted with grass or ground cover or shrubbery or other suitable live plant material. Tomatoes, peppers and cucumbers are what Basses see as suitable.

However, Oak Park’s Planning and Technology Director Kevin Rulkowski says the city disagrees. He says, “If you look at the dictionary, suitable means common. You can look all throughout the city and you’ll never find another vegetable garden that consumes the entire front yard.”

So what is suitable? from another local report


“If you look at the definition of what suitable is in Webster’s dictionary, it will say common. So, if you look around and you look in any other community, what’s common to a front yard is a nice, grass yard with beautiful trees and bushes and flowers,” he said.

God forbid your yard doesn’t include beautiful trees, bushes and flowers. It’s your job, Oak Park citizens, to give Kevin Rulkowski pretty things to look at. According to Bass's Blog - oakparkhatesveggies, -she’s demanding her right to a jury trial. So the city plans to throw the book at her:

"our attorney spoke to the prosecutor today. (for the record, my crush on him is totally finished after today.)

his position: they are going to take this all the way.

officially, this means i am facing 93 days in jail if they win.

#3 | ThinkAnarchy | July 7th, 2011 at 4:25 pm
What a crazy woman. Where did she get the stupid idea she should have
control of what she plants on her front lawn? The nerve of these
citizens who refuse to follow rules that are in intended for the good
of all humanity. Just imagine if she were growing a plant with vines,
a child could easily get caught in them while trespassing, resulting
in death from strangulation.

I for one am happy they are prosecuting her and think possible penalty
is to light.


How dare this wage-slave serf attempt to grow her own food to feed her
family and educate the community on gardening during these tough
times. That is seditious and unlawful behavior and the
snitch...er...patroit who turned her in should get the German Cross
Medal of Service! This is a terrorist victory garden and plot against
the government plain and simple! She should just get foodstamps and
eat GMO processed food from the frozen section. For her sake I hope
she doesn't prove herself to be an enemy terrorist of the state by
quoting the Constitution or the Bible (Gen 1:12) for that matter.
Maybe the 93 day sentence in a reeducation concentration camp would
cure her of her rugged individualist terrorist spirit!

The source of the traffic is the post below on the vegetable garden in Oak Park, Michigan, which made the front page of Reddit, then got a link from Drudge. If you’re new here, welcome. Hope you’ll stick around. I actually have to close comments on that post, because I just can’t keep up with them. There are about 300 still awaiting moderation.

That story is ridiculous, of course. And I imagine the Oak Park servers and phone lines are getting a workout. Which is good. But it’s also a little strange that of all the stuff we cover here, this is what blows up the Internets.

I left The Agitator a comment saying that I hope this fires up the intertubes in a way that eventually sparks SOMETHING in EVERYONE to WTFU.

You can bet your sweet bippy that I’ll be using this story to agitate a few in need.
Posted by JerseyCynic at 4:45 AM