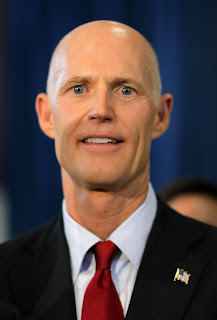 These are the eyes of (p)Rick Scott, the Republican Governor of Florida.

He wanted to cut funding for nursing homes and rehabilitation centers, places that enable the developmentally and mentally disadvantaged to live somewhat normal lives, with due supervision and care. Public outcry forced him to walk that back.

He and his Tea Bags are slowly lowering the bar of regulation in the state, seeking to ensure that the ground will be fertile for large businesses and developers to rape the land and leave a ruined environment for succeeding generations. They have also lowered funding for education while raising rates for higher education, cheerfully ignoring the fact that modern industry and business needs an educated worker and not a mindless prole, kept docile by Victory Gin and endless fear about being cut off with not even minimal benefits.

But you have to admire him, and the others of his greasy ilk. He's come up with a way of being at least somewhat accessible while still denying people who oppose him a voice.

Scott uses social media a lot - FaceBook and Twitter. In fact, he recently had a 'town hall meeting' over social media. This is inspired - you can still claim to be open to taking flak from anyone, while at the same time able to shut out anyone who may disagree with you.

When he does have to go somewhere to face voters in reality, he shows some skill in that as well. His budget proposal (in other words, 'his blueprint for destroying Florida') was revealed at a meeting in a church in the heart of the reddest parts of northern Florida. These people love him - for what, I have NO idea.

But then I'm a realist, a rational thinker, and a Classic Republican.

And every time I think of the 'modern' Jefferson Davis/John Birch/Raving Lunatic Republican Party, I think of (p)Rick Scott.

And those dead, soulless eyes.
Posted by Walt at 9:26 AM