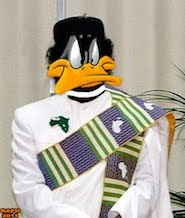 (Picture courtesy of the crazy people at Wonkette.)


A day after UN Security Council Resolution 1973 was announced, NATO upped the ante on the side of the opposition to Colonel Muammar al-Qaddaffyduck's regime.

French Rafale warplanes struck at targets on the approaches to Benghazi, supported by cruise missiles launched from US submarines (the US have dignified it with the name Operation Odyssey Dawn).

Danish F-16 attack aircraft are being moved to a US airbase in Italy for operations across the Mediterranean, and the French are moving the aircraft carrier Charles de Gaulle into the area.

Hearing about that made me wonder if the French have managed to correct the de Gaulle's manifold engineering problems.

Anyway, we have begun intervention in Libya. So far, it's only cruise missiles. I expect Predator drones soon.
Posted by Walt at 4:35 PM