Anger, violence and interest in racist ideology did increase in the hours and days after Obama was elected president in November, hate groups experts said.

Three New York men were indicted on charges of conspiracy to interfere with voting rights -- accused of targeting and attacking African-Americans in a brutal crime spree soon after Obama was declared the winner on November 4.

And interest in racist ideology was so high right after the election that computer servers for two White supremacist Web sites crashed, according to the Southern Poverty Law Center, which tracks hate groups.

But the violence and interest soon subsided. Leaders within the white supremacist movement are now seeking to capitalize on Obama's presidency by using his election to help grow their organizations.

"President-elect Obama is going to be the spark that arouses the 'white movement,' " reads a posting on the National Socialist Movement Web site. "Obama's win is our win. We should all be happy of this event."

In an interview posted on his Web site on election night, former Louisiana state Rep. David Duke said Obama's election "is good in one sense -- that it is making white people clear of the fact that that government in Washington, D.C., is not our government."

"We are beginning to learn and realize our positioning," Duke, a prominent white supremacist, later said in the election night recording. "And our position is that we have got to stand up and fight now." 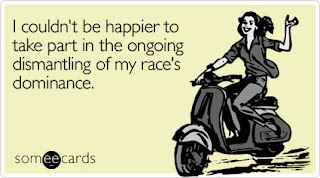 Posted by Liz Blondsense at 8:43 AM