Who Won the Debate? 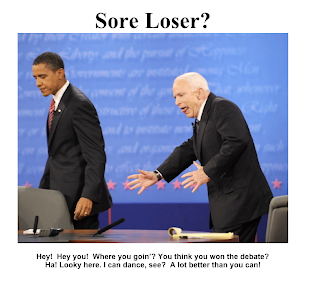 The blogosphere is buzzing with analysis and commentaries over who the REAL winner was after last night's pre-presidential debate held at Hofstra University. Esteemed economic guru to the Stars, The Dark Wraith Gets it and Gets it Right (on Free Trade, Anyway) on citing Obama's superior foreign trade policy assessment. Obama defended his position:

"I believe in free trade. But I also believe that for far too long, certainly during the course of the Bush administration with the support of Sen. McCain, the attitude has been that any trade agreement is a good trade agreement. And NAFTA doesn't have -- did not have enforceable labor agreements and environmental agreements. And what I said was we should include those and make them enforceable, in the same way that we should enforce rules against China manipulating its currency to make our exports more expensive and their exports to us cheaper..."
We've decided, too. Here are the highlights:

Who really should be the next POTUS? Ralph Nader.