When the Long Arm of the Lawlessness Knocks... 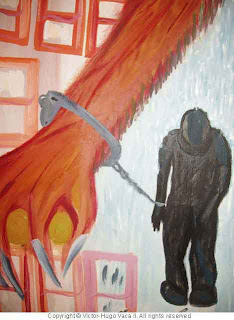 As details of Wall Street's bumpy $700 billion bailout ride to the bottom of the financial abyss unfolds, jangled sounds from the merchant class in steerage shout "Hey, who's running this ship?" "Mwahahaha! It self-selects!" laughs and laughs the ghost rider second mate at this woeful lot, these Chaucer's pilgrims -- as the hapless souls on board scramble to grab the last chairs on the deck, scrimmaging to hold onto anything that isn't moving.

Like a tangled web of global GPS systems accountable only unto themselves, these plundering pirates of the damned wrestle not with their flimsy excuses of collective (non) conscience but with plans to to socialize their corporate ponzi schemes as they buy off Congress and show the slaves who's REALLY boss right before this presidential election. "They'll never know!" Shouts the burly first mate --not unlike a whole first row of concert goers wearing tee-shirts emblazoned "He'll Never Know" at a Stevie Wonder concert.

At a meeting of the World Bank's policy-setting committee, former CEO of Goldman Sachs, King Hank Paulson, gets to make it all up as he goes along! Hank has now declared that despite the corporate looting of middle class America that has gone without massive protest, his watch has absolutely no plans to enact laws that protect American jobs:

"Although we in the United States are taking many extraordinary measures to ease the crisis, we are not pursuing policies that would limit the flow of goods, services or capital, as such measures would only intensify the risks of a prolonged crisis."

"Flow of goods"? As if we need any more tainted milk products from China. Willie Nelson and his fellow Farm Aid board members John Mellencamp, Neil Young and Dave Matthews sent an open letter to Congress asking that some of that money be redirected to farmers across the U.S. so that we can better strengthen our food supply and safety and restore prosperity to this nation's once abundant family farms. How about restoring "Services"? Who wants to pay three times as much for their weekly mow & blow? (Certainly, not yours truly. Tough choices, indeed.) Oh, and about that "capital" thing: we of course know that "capital" is HR speak for "cheap imported labor from third world countries" that was supposed to make the Captains of Industry squeal with delight over all of those projected profits that was supposed to increase job opportunities for white collar workers (we all know how that turned out.) But don't count on the two presidential candidates "debating" any of these key issues during their upcoming "debate."

Maybe we are just not looking at the bright side... As long as we can keep buying all that crap from China and importing cheap labor into this country to take white collar jobs from our own citizens during this economic collapse, we don't have to be guilty of not being superstitious... So far, things are working out just great for Paulson and Kashkari & Co., as long as the plebes keep believing in things they don't understand...

Meanwhile, Spain and other countries are facing severe economic difficulties, as governments everywhere are hunkering down to protect their own.

And what of our Government? What government? Our degenerate government largely consists of actors, wannabes, pedophiles, and a whole casts of characters slopping around the trough with great abandon, viewing the neighborhood voters as the suckers they have proven themselves to be. The U.S. Congress is nothing but a melamine coated candy store without any clerks minding the till. These scallywags and their Wall Street Sugar Daddies succeed in hornswaggling the plebes to row in the galleys despite dwindling human and labor rights, as they grant themselves cushy compensation plans and benefits on the taxpayer dime, throwing out labor protections along the high seas of Greed, Hubris, and Enmity. But it's not about the people, and the people know it's not really about the people. It's about a rudderless ship that is remote-control operated by a few corporate, upstairs greedstas who have no more use for an educated middle class who dare to believe that they actually deserve healthcare, good paying jobs, privacy and civil rights.

"I know people from all kinds of backgrounds - the very rich, to the very poor. The socioeconomic divisions are greater than any of race, creed, or color. Period. The historical record clearly represents that the very wealthy despise the poor and even the "merchant class". The "merchant class" of today includes all white collar workers, the so-called Upper Middle Class. The Republicans do not serve them either. Small business is not served by either party - but especially not among the old wealth elites who really run the Republican party. The Democrats are no better. Their allegiance is to a foreign power instead of the best interests of the USA."

There is some good news -- our nation's Capital will soon be losing its eight-year extended stay village idiot.