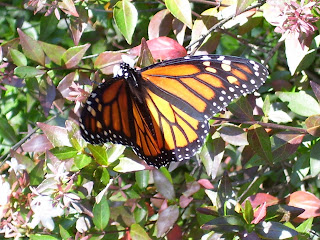 Had a much more restful trip heading south than I did heading north, and thank you, Amtrak for charging me so much extra for a sleeper compartment.

Next time I fly up there and take the PATH train in.

Took a bunch of pics of the trip back, including a few shots of Washington DC from the train. As we pulled into the Alexandria station I got several shots of the National Masonic Memorial, an impressive neo-Whatever pile erected to either commemorate all the good the freethinkers and Masons of the country have done over the centuries - or channel spiritual energy for their lurid secret rites and blood rituals.

It depends on who you talk to, I guess.

Final tally of pictures taken was 1043, less than half of the 2100 or so shots I took during my trip to Germany. Why so few? Well, simple answer is that I was only in NYC half the time I was in Germany. So there.

Pictures will be posted, of course, starting with the one you see above, a moment of beauty brought to you courtesy of the guy who designed Central Park.