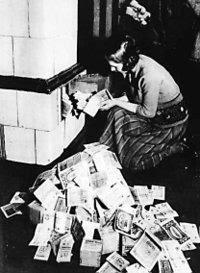 If you only read one story this week about the financial crisis, read Peter Goodman's extraordinary take down of Alan Greenspan in yesterday's New York Times.
Among the highlights:

• While Warren Buffett and and Felix Rohatyn were calling derivatives "financial weapons of mass destruction" and potential "hydrogen bombs", Greenspan was collaborating with Robert Rubin and Larry Summers during the Clinton administration to prevent all efforts to regulate them.

• Brooksley E. Born, the former head of the Commodity Futures Trading Commission, a federal agency that regulates options and futures trading, warned Congress in 1997 that derivatives needed to be regulated. Greenspan, Rubin and then-SEC chair Arthur Levitt responded by asking Congress to strip the Commission of its regulatory authority, and Congress complied. Born then left the commission.

• Levitt, who now regrets his position, said "Greenspan opposes regulating derivatives because of a fundamental disdain for government."

• The derivative market now totals $531 trillion (up from up from $106 trillion in 2002)—and that number is at the heart of the chaos still roiling the markets.

Read it and weep.
Posted by Missouri Mule at 8:46 AM