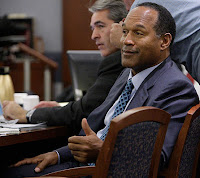 Well – he’s finally going to prison – and for the rest of his life, most likely. O. J. Simpson was just found guilty of armed robbery and kidnapping – 12 charges in all. Even with a light sentence, he’s looking at 15 years – and there’s a good chance the judge will give him life. Life. Ironic, really; ‘cause its 12 years to the day since he was acquitted of slaying his wife Nicole and her friend Ron Goldman.

I think he killed them – and I’ll tell you why. The minute the murders were announced, and it was made known that the victims dog (an Akita) was found wandering loose during the murders – I knew the killer had to be someone that dog considered family. Why? I know the breed. They are a Japanese dog – temple guard dogs. Now I lived in Japan for years. Akita’s are considered a national treasure. I know a great deal about what makes them tick. Trust me - had Nicole been killed by a stranger, that dog’s body would have been found right next to her – along with that of the perpetrator, most likely. See, Akita’s will kill anyone threatening their family – kill them, or die trying. It’s their job. As temple guard dogs, they were trained to give a single warning bark before going for the throat.

But this Akita was found wandering near the bodies, covered in blood, whining. That told me immediately he knew the attacker. Not only knew – but considered that person part of the family. That’s why he was confused. There’s only one person who fits that criteria: Simpson. I checked on the history of the dog. It had belonged to both Nicole and O. J. – only moving in with Nicole to her condo following the divorce. So to that dog - O. J. was still primary family. That’s why I believed O. J. did it. That Akita would have instantly attacked anyone else.

So now we’ve come full circle. It caught up with him in the end. Violence always begets violence. Simpson thought he could get away with anything. It’s nice to know justice won out in the end.
Posted by TFLS at 2:44 AM