Sorry for the rant - but it's been a bad few days and I've absolutely had it. I think this is a subject that really needs attention. I wish to god more of the mainstream media would talk about health care and how it affects every day Americans. And please excuse the length. I had a lot to say on a very personal subject. 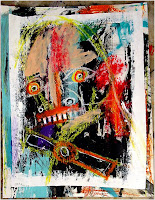 OK. I surrender. It’s over. I can no longer maintain a rear-guard action against the pain. Some months back I gave up fighting the use of pain medication (after years of refusal). Now it’s the pain itself. I am unable to defend against the relentless, moment by moment, withering assault. At some point the wall just gives way - its defenders overrun by overwhelming odds. I am mentally, emotionally and physically drained. Every time I sit down to write (to think) – my body attacks. Wave after wave of unremitting pain batters my brain till it simply closes. I feel like I am drowning in a sea of blood and fire. Maintaining sanity itself is exhausting.

So fuck it. I give up. I do. One day last week the pain got so bad I actually passed out for a few hours. And I must say - outside of the fear and disorientation I experienced upon waking – that five hours of unconsciousness was the best rest I’d had in months. Lately, I’m lucky if I can squeeze out 4 or 5 interrupted hours per night; so to sleep without waking every ½ hour from the pain (!!!). It hardly mattered how I got there. Oh – the pain was present for its usual just woke up greeting – but for five blessed hours I wandered dream free in the land of unconsciousness. It was about as blissful as my life gets these days.

So what does this mean in feet on the ground terms? That I can no longer plan my life (such as it is). The entire concept of ‘future’ just evaporated. And I’m not even talking long term here. I mean tomorrow. I cannot plan for tomorrow. Nothing, not even a phone call. The pain takes precedence. It overwhelms. I do not know from moment to moment when I’ll go ‘offline’. There are days when it takes hours to merely traverse the house. And I’m always cognizant of time: when I last took a pain med - when I can take the next. Because the meds never quite do it; not really. And they are useless against the severe stuff – the gut wrenching, scream till you’re hoarse, wish you were dead kind. But the medication gets me out of bed in the morning, and enables me to eke out the odd hour or two of sleep. Those simple pleasures are like gold to me now.

Of course – practically speaking - this absolutely kills any attempts I might make at one-to-one communication. I can be right in the middle of talking to somebody and wham! Suddenly I’m screaming on the floor. Try explaining that to a stranger (especially when you’re in too much pain to talk). People either call an ambulance or the police (neither of which will do me a lick of good). Others accuse me of being rude (how dare you hang up like that!). Explain? I have. In triplicate, with some. If you’ve no personal experience with chronic pain – you have no frame of reference. ‘Hurt’ means a headache or a stubbed toe. Take an aspirin, and call back in an hour. Not possible with this kind of pain. Peaks can last half a day (or all night). Afterward I’m too wrung out to make much sense. And no one wants to hear that. When someone asks how you feel – the answer’s supposed to be ‘fine’. All in all - it’s a conundrum I’ve yet to unravel. So - I try and avoid outside conversation. Which leaves me almost completely cut off from the world.

Life in the fast lane. Truly makes you lose your mind.

Fix it, say you? Easier said than done. I received another bill from one of the CAT scans I had back in June. Almost 600 dollars. We can’t pay it, of course. I was able to persuade the hospital to split the payment into three equal amounts; but they didn’t give me three months to resolve it. Only three paychecks. And no – I don’t know how I’ll manage. We can barely afford groceries these days. Extra medical bills? Deal breakers. We don’t even have a credit card to put them on. We’re using those to buy groceries and feed our pets. So going back to the doctor for more expensive tests (which I’m told are necessary) and/or the surgery they say I need (to repair the crushed disks and broken spine resulting from two very bad accidents) is beyond impossible. We simply cannot afford it. Our insurance demands high deductibles – and even with that, it only covers a percentage of overall bill. We’re expected to pony up the rest.

That’s a lot of money. More than you’d think. More than it used to be, at any rate. You know - my husband’s medical insurance used to be the very best there was. We could go to any doctor, anywhere and get the help we needed at minimal cost. All that’s been eroded these last few years, as deregulation after deregulation allowed employers to strip plans to the bone. It will only get worse under McCain’s brave new ‘buy your own’ policy. Imagine getting taxed on the value of your insurance. Think what that would do to your taxable income. I do. I think about it constantly. Medical plans are worth about 12K a year (per person). That means raising taxable income by that much. That’s 24K for my husband and me. Even with the maximum 5K deduction McCain says he’ll allow – we’d end up paying oodles more tax. Employers would get taxed too – so they’ll start dropping coverage. I mean – why not? Most big corporations have already eliminated benefit packages entirely. Everyone these days is considered a ‘contract’ employee. That means no help you don’t buy for yourself. In the end, someone like me – someone with existing conditions, someone with expensive prescriptions….I’ll be all on my own.

Oh, I know the McCain argument: that big business will ‘step up to the plate’ and suddenly become caring human beings, putting their workers welfare above obscene profit. Yeah, sure. In who’s universe? Not gonna happen. But there’s always more people, right? More bodies to fill those positions? Who cares if they’re American? Just trundle off to some third world country where medical care and life expectancy beggars even our own, and hire peasants for pennies. So they die off even sooner. There’s always more. Especially in countries shackled by fear and superstition. Not providing adequate medical care can be spun as some kind of cultural imperative. Like here. ‘Dealing’ with illness or pain is patriotic – haven’t you heard? It’s the Puritan way. Suck it up. If you’re like to die, then get on with it and decrease the surplus population. Oh wait – that’s been said before. By Dickens, discussing the heartless business practices of his own time. Nice to see human beings are so consistent. The results are rather the same, actually – no matter the era: people left to fend for themselves, with no one giving a flying fuck.

Frankly? I cannot imagine what life would be like with no pain medication. The very thought scares the bejesus out of me. No pain meds, no migraine meds, nothing to control my IBS or my blood pressure…..I would be consigned into hell, burned alive, tortured by sadists drunk with political power; not caring that I, along with many other’s suffered like lab animals; mute, agonized, pleading for release. I have to tell you – should this ever come to pass – should I get kicked to the curb by an unfeeling medical infrastructure - I told my best friend I’d sell what little I had left for a one way ticket to Amsterdam. It’s not like here. Physician assisted suicide’s legal in Amsterdam. Doctor’s really care about their patients. It isn’t just a quest to be the richest asshole in town. I could terminate my suffering with some modicum of dignity. Oh – I’d love to just hie off to Canada or New Zealand or England – anywhere blessed with nationalized medicine - have them pick up the tab for my care. But that’s not possible. I’m too ill to have marketable skills (my writing has yet to attract a publisher, and the pain makes practicing my former profession impossible) – not to mention that none of those places are exactly advertising for medical refugees.

Morose? Defeatist? Don’t mean to be. Nor am I advocating suicide (as a rule). I’ve always believed life equals hope. Each breath I draw extends my belief that tomorrow, life will be better; or it did. But I’m a realist. And I know all too well the effects of chronic, debilitating pain. People with MS, ALS, Fibromyalgia – any disease that assaults the pain centers. After a while you simply cannot manage without a great deal of help. What to do when that assistance evaporates? Where do you go? How do you cope? Excellent questions. Questions we as a society routinely ignore. We leave the chronically ill figuratively and far too often literally out in the cold. Dickens’s world might have been Scrooge-like and over-run by class and income disparities – but are we really any different? Haven’t we stratified our own society? Don’t the rich and powerful have full access to all the good things scientifically available? And aren’t the rest of us standing like Tiny Tim, our faces pressed to the glass, wishing and hoping that we too had access to all things bright and beautiful?

So…for the time being at least, real help of any kind will continue to elude me. In the meantime….I acknowledge it. I’ve lost the fight. I surrender to the inevitable, the inexorable - the power of the pain. Succinctly put - pain wins - as does every other issue plaguing me at this time. It’s really amazing how many people out there are willing to take advantage of situations like this. Like sharks scenting blood in the water, they circle, awaiting the most proprietous moment to attack. Marauders the lot. Writing? I try. I always try. But it comes in fits and starts. My blogging has become irregular at best (as I’m sure you’ve noticed). The rest…..well; let’s say I do the best that I can under difficult circumstances. As for me personally? Another day, more tears, more pain pills, no relief, prayers all around: