And Now the News We Really Don't Give a Shit About 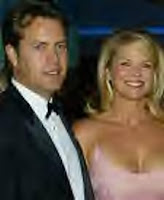 Cook tells Walters that, in slutting around and racking up massive porn bills, he "was seeking a connection I could not find in my own marriage. I think the emotional aspect of our lives had changed. I think we were both feeling more like we were living with a brother and sister than a life partner." So, the story goes, he went off and found that connection with his buxom 18-year-old employee.
In the interview airing Friday night Cook seemingly does away with the pesky confidentiality agreement under which he and Brinkley ended their messy divorce recently (his $2.1 million settlement is said to have gone mostly to legal fees), saying, "I wanted a little acknowledgment, a little attention, a little thank you every now and then for my efforts, for the amount of time I took to care for her and my family, for the wealth I was building." Ha ha, whoa! But that's not to say he's broken completely: "My hope is that the world see that I'm not the scumbag pervert that I've been painted to be."
Anyway, Peter. The takeway? Go the sex-addict route, cornered horny husbands. There's nothing worse than a certifiable narcissit losing it all and returning as a whiny little bitch in a Barbara Walters interview.
Posted by Missouri Mule at 11:15 AM