Sarah Palin in the Nude? 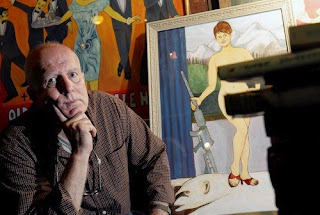 For any Chicagoan who hasn’t had the honor of patronizing one of the North Side’s legendary drinking establishments, the Old Town Ale House is as fine a place to have a beer with fellow comedy thesps and other quirky trust fund misfits or trendy in/outcasts as anyplace else within (reasonable) spitting distance from Second City.

Now, thanks to painter Bruce Elliott who painted a nude portrait of Sarah Palin after his daughter “who does a good impression” of the Alaskan Governor "served as a model" for him, you too can raise your glass in absentia to (a portrait of) Sarah Palin in the Nude as it is displayed in the Ale House. Or better still, visit the popular watering hole for yourself and let the proprietress know if you think the portrait is exploitative, offensive, sexist, creepy (was the daughter posing nude or did she wear a body stocking) a slick PR attempt to drive up liquor sales, or all or none of the above?
Either way, the Chicago Tribune is taking a poll so you be the judge.